The two words I have heard most often to describe the current state of the global economy are “strange” and “interesting”. In the UK, despite the mishandling of the pandemic, the government have been very effective at vaccine procurement relative to Europe. This has given the economy a much needed head start given the financial headwinds created by Brexit. The impact of this should begin to be felt towards the end of the year with growth hopefully returning to a healthier level. There are some additional positive points to consider in the midst of the current situation. But first, a brief performance review of our three main portfolios: 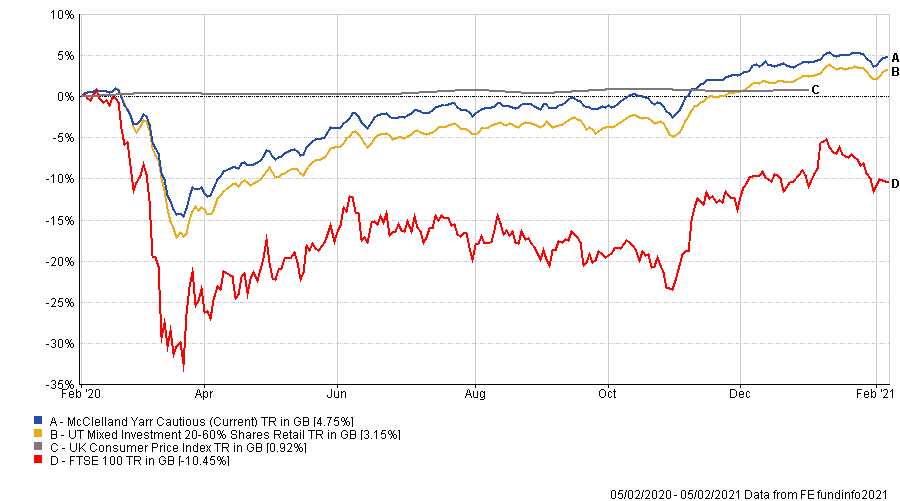 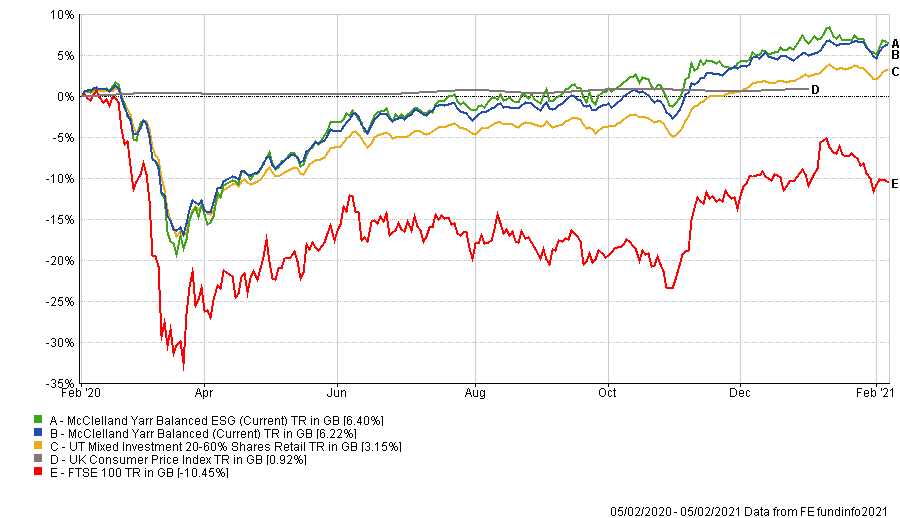 Although the low rates are terrible for savers, they do give the government considerable scope to invest in the economy through borrowing. Mortgage rates are also low and it is possible to fix a 5 year rate for just over 2% which is very positive for housing and all the jobs sustained by it. The stock market also benefits from the low interest rates as cash deposit holders face annual losses in real terms due to inflation. Alternatives to cash have become more appealing as fixed term deposits reach maturity.

It is hard to believe inflation is almost absent from the mainstream media discourse as it has been subdued for an unprecedented length of time. This would have been unthinkable 20 years ago, as many of you will remember, when it would have made the headlines on a regular basis. A combination of technology advances, globalisation and a reduction in the power of the unions has meant that there is little wage pressure currently. Actually, some inflation could be a good thing as it would help to erode the value of the national debt and if it were to rise there is no guarantee that interest rates would rise too.

Apparently, it has happened, or has it? We still need to follow EU rules on our biggest export, cars! Failure to adhere to their standards and regulations will result in tariffs which serve to all but guarantee our continued compliance.

This is an evolving situation with many substantial issues still to be negotiated, financial services being one of the most relevant to our clients. However, we have been assured that our global portfolios which contain European investments will be almost entirely unaffected by any potential changes.

Watch out for announcements of extra projects to create jobs and boost the economy. Business does not have the confidence currently to invest enough to help revive the economy so public spending will need to fill the gap. While it will create more debt in the short term it will create more tax revenue longer term. If the major economies do the same it will be very positive. Happily, China is rebounding strongly and it is now consuming more of the products made in the west. While this trend is helpful it will not be enough to create sufficient growth here and we know from the last time that austerity is not a good way to achieve recovery.

Populism is on the increase worldwide. It stems from social inequality and there will be a greater emphasis on policies which seek to raise the whole of society economically. The information age is a big contributor to this issue as the lesser paid jobs are filled by immigrants and the local workers have little pricing power. Contrast that situation with the professions where technology and immigration have had a much lesser impact. The main tool to begin is taxation and there will likely be tax increases phased in over the next few years to both help repay the national debt and also to create more social equality. This is good provided it is well managed, but we will need to watch this one carefully. We can expect scare stories about taxation over the next year concerning what is planned to prepare us for what will actually happen. As usual the increases will be less than feared and desired effect will be that we will feel relieved that it was not as bad as anticipated.

This is the latest example of populism. The idea was to take money from the rich hedge funds and to spread the winnings among ordinary young people. Very simply, the hedge funds make money betting that shares of weak companies will fall in value. The act of placing the bets can create a self-fulfilling prophecy due to all the negative publicity they create. At times, it can be close to price manipulation. This time a vast number of small investors who use a social media platform called Reddit decided to club together and to bet the other way. The impact was truly massive and the share price rocketed upwards. Due to the extreme price movement in GameStop (a failing computer games chain of shops) one hedge fund had to be rescued and others suffered very big losses. The same exercise has been repeated with other shares where the hedge funds had bets that the shares would fall.

Although very large amounts of money initially passed from the very rich to very high risk taking young people, the end result will more than likely lead to losses. We think that this may determine how many more times this is repeated. It has been an event that nobody predicted and seems to be in many ways surreal.

We shall see how long they can keep their money. Also, unfortunately some US pension funds invest in hedge funds so there may be lots of ordinary people who do not know that they are losers too. The young people who have driven up the price way beyond its true value now need to work out how to sell their shares or unwind their bets. This could be a one time event or it could be the end of a strategy for the hedge funds

As mentioned previously, we could be entering the last year where the range of generous tax benefits are as good as we have come to expect. At a minimum it is worth checking your ISA allowance as tax free income could be at a premium in future. Personal and company pension allowances could be cut further and higher rate tax relief removed. The most likely target for tax increases will be Capital Gains tax as the impact is likely to be concentrated on the wealthy. Having money in an ISA is a shield from both income tax and capital gains.

Despite all the challenges over the past year and the stock market crash our funds have held up well and are showing a positive return. We encourage you to make use of the tax allowances before the end of the tax year if you are considering making an investment at some point in the near future.